Every once in a while a previously unknown release pops up on sites like eBay. Sometimes even the group is unknown and that seems the case for two Hosanna 45’s (#7684 & 8080) which were auctioned recently. The group is the Bethlehem Travelers and although the Gospel Discography (Laughton/Hayes) lists two groups with such a name, this may very well be a different group. The groups that are listed in the discography are from Hattiesburg, Mississippi and from Belair, Maryland. Of course it could be one of these groups, the Hattiesburg group being the most likely, but there’s no similarity in member names or anything else that gives an indication. Intriguing! The 45’s are now listed in the Hosanna discography. 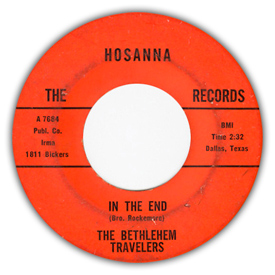