From the back cover of the CD-r: 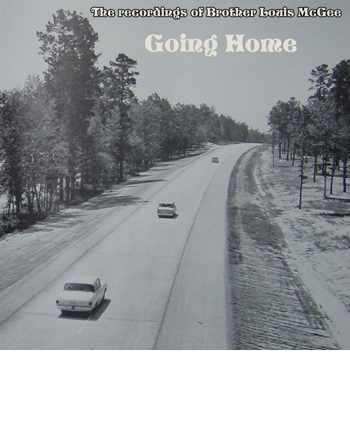 Brother Louis McGee is a mystery. It’s likely that he hailed from Texas, it’s sure that there were at least six singles released, and that’s about it.

In 2008 I bought a box of 45’s from a seller on eBay. I had no special reason to make my bid, other than an extreme curiosity about what seemed to be an obscure collection of Texas gospel 45’s. Most of the artists were unknown to me, so were many labels.

I asked around and searched the internet but nothing but dead end streets, except for an unconfirmed possibility that our man sang as Lewis McGhee with the Gospel Tornadoes on Designer. These tracks are quite different from the rest, but they are included on this CD-r as bonus tracks.

I decided to record all tracks I have and put them on a CD-r. This way it may attract more attention and solve some of the mysteries along the way, but even more important: Brother Louis McGee’s recordings need to be heard! He’s a great artist who performs in the tradition of Rev. Cleophus Robinson, Harold Boggs, Alex Bradford and others, and he has a personal, bluesy and expressive style.

These recordings bring you back to what church was some 40 years ago, best expressed with recordings like “He Will Understand And Say Well Done” and “Going Home To Jesus”, which were recorded live in church.